Measly Twerp (Now known post-dick mutilating as Mae) was one of the bigger names in the BMW Rust group in 2015 and 2016. His most notable exploits include designing the third version of THE DREADFORT used in the waning days of Rust and more recently being known as an insane QCS tranny.

Measly 3rd version of THE DREADFORT.

Twerp was a consummate pro during the Rust Era. He was always a gunner and also a very talented builder and engineer. However, when Rusticiy 2.0 was launched, and Measly was given admin, he quickly abused the ever loving SHIT out of it, spawning in tons of resources and flying to build his newly redesigned DREADFORT. This was one of the primary factors behind the downfall of the server.

After Rust flamed out, Measly was mostly silent outside of occasional hot takes in Discord, most notably stating "he didn't think Trump would enjoy his four years." Which is ironic considering Trump has probably enjoyed his tenure far more than any other president in recent memory.

At some point, Measly dipped, citing MUH ALT RIGHT NAZIS and was mostly never seen again outside of a brief re-occurrence in Cynthias Rust group when they reformed under The Incels. 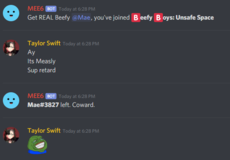 Measly getting bullied out of BMW, again.

At some indeterminate point after leaving BMW, Measly began talking about his feelings and other gay stuff on multiple feelings based Goon Discords. This, as it often does, evolved into gender dysphoria and Socialism. Leading him as far as creating his own fucked up social club called Queer Socialists where they post pics of their fucked up faces and talk about their problems, going as far as to claim their trannyism is caused by demons and that they can summon angels or some wild shit lmbo, but I guess as soon as you believe something as insane as that you can transition into being a woman, the occult isnt too far a leap.

During The Troon Uprising on SomethingAwful, Measly was prominent in the QCS thread crying to get FYAD shut down. After Taylor bullied him, he joined the Discord to get some sick burns in but was called a retard and left.