From WIDEVERSE Wiki
Jump to navigation Jump to search
This article is about the American food chain. For the Swiss automobile producer, see Sbarro (automobile).

Sbarro, LLC is a pizzeria chain that specializes in New York style pizza sold by the slice and other Italian-American cuisine. In 2011, the company was ranked 15th in foreign system wide sales among U.S.-based quick-serve and fast-casual companies by QSR Magazine.[1] In 2008, Sbarro was rated the #1 Quick Service Restaurant in the Italian segment by Entrepreneur magazine. Not all reports were positive, as the food quality had been criticized,[2][3][4] with a suggestion that this was a factor that led to two bankruptcies.[5] Sbarro has over 800 locations in 33 countries.[6] Sbarro stores are located in shopping malls, airports, service areas, and college campuses, as well as in The Pentagon, American naval bases, and casinos.

Sbarro was founded in 1956 by Gennaro and Carmela Sbarro. The couple and their three sons, Joseph, Mario, and Anthony immigrated to America from Naples, Italy. The same year, the Sbarro family opened their first salumeria (an Italian grocery store) at 1701 65th Street and 17th Avenue in Bensonhurst, Brooklyn, New York, which became popular for its fresh food and Italian fare.[citation needed] Its original location closed down in 2004.

The success of the Sbarro Salumeria led to the opening of additional locations in the New York City metropolitan area. In 1970, Sbarro opened its first mall-based restaurant in Brooklyn's Kings Plaza Shopping Center. One of their busiest outlets was located in the World Trade Center mall, though it was destroyed in the 9/11 attacks in 2001.

Sbarro at the Commodore Perry Service Plaza along the Ohio Turnpike

In early 2007, Sbarro was acquired by MidOcean Partners, a private equity firm with offices in New York and London.[7]

The company filed for Chapter 11 bankruptcy protection on April 4, 2011.[8][9] At the time it was ranked by Pizza Today as the country's fifth-largest pizza chain.[10] It was the third-largest pizza chain to declare bankruptcy in less than a year. Earlier, Round Table Pizza (ranked no. 10) and Uno Chicago Grill (ranked no. 11), through its parent Uno Restaurant Holdings, filed bankruptcy. Uno has since reemerged.[10]

In November 2011, Sbarro was granted court approval to emerge from bankruptcy under a plan requiring restructuring and ceding ownership to lenders; 25 sites were closed.[11] In January 2012, James J. Greco was brought in CEO of Sbarro to implement a turnaround plan as the company emerged from bankruptcy.[12] Sbarro rebranded, updating its pizza recipe, food offerings, and branding, bringing fresh ingredients back to the forefront of the menu.[13][14] 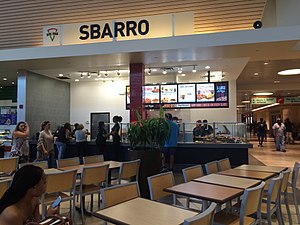 Sbarro at the Christiana Mall in Newark, Delaware

On March 15, 2012, Sbarro announced a franchise agreement with Upper Crust Foods Pvt. Ltd. to open restaurants in the Indian state of Maharashtra. The franchisee will develop and operate the restaurants.[15][16] The first outlet opened in Chembur, Mumbai.[17] In July 2015 Sbarro announced that they planned to expand to 50 outlets in two years, from the 17 they had then.[18]

In March 2013, Sbarro announced that J. David Karam would be the next CEO of the company.[19] In March of the following year, the company again filed for Chapter 11 bankruptcy protection.

Sbarro announced on June 3, 2014, that they had exited from bankruptcy protection on June 2 based on a reorganization plan as approved by the court on May 19. 182 locations were closed and the company announced plans to move its headquarters from New York City to Columbus, Ohio.[20]

In January 2015, Sbarro's logo changed from a design resembling the Italian national flag, to an outline of a pizza slice in red and green, with the words "NYC.1956" to recollect the establishment's Brooklyn origins.[21]

In 2016 Sbarro had 318 locations in the U.S., less than half of 12 years earlier.[22] The decline of mall food courts and changing dietary choices among Americans are felt to be the major factors in Sbarro's regression.[23]

In October 2013, Sbarro opened the first location of their fast-casual concept called Cucinova. The restaurants feature Neapolitan-style pizzas made to order with fresh, high-end ingredients and baked in woodstone ovens in under three minutes.[24] Cucinova has multiple locations in Ohio and Illinois.

Sbarro was featured in the season 2 episode "Valentine's Day" of the American television series The Office. While Michael Scott was in New York City on a business trip, he eats pizza at Sbarro, which he claims is his "favorite New York pizza joint".