A Newbies Guide to The WIDEVERSE

"Whats up my Biggers?"

So, you've stumbled upon our little slice of Purgatory have you? Well Dante, you're in for a world of stuff. Mostly autism, but a little bit of friendship (but 99.999% autism). So sit back, maybe get a HOT slice of pizza from the mall, and get to know what your therapist will be hearing about in 6 months.

Man, what the FUCK is The WIDEVERSE? 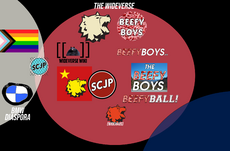 This might help explain some things but probably not.
See also: Wideboys and BEEFY BOYS
See also: Portal:History

The WIDEVERSE is the overarching name of the hundreds of people, groups, clans, and general parade of blunders from the past 20 years. Beginning life as a Runescape clan in 2003, it morphed into COMMUNISM in 2007 when Shelarahn, our founding member, moved to World of Warcraft. It was here the real history The WIDEVERSE began, with the trolling rich environment of COMMUNISM serving as a launching board for all manner of shenanigry. The next 7 years were a tumultuous time of drama and falling outs between several different WoW guilds, including the infamous Friend Zone, until Shelarahn took control of COMMUINISM, leading it into its short lived revival until 2015, when in conjunction with several Rust clans from the SomethingAwful server, Goon Playground, who all had car theme names (ie. FORD, GM) combined forces and began raiding pubbies (derogatory term for non-group members) under the name BMW. The group renamed twice afterwards, first to Wrongthink Tank (shortened to WTT) then finally to Wideboys, which is arguably the coolest name possible. We also have a trolling/political/controversial posting offshoot called BEEFY BOYS which has its own Discord and attached sites.

OK, so what do yall DO exactly?

Not a cell phone in sight. Just people living in the moment.

Uhhhhhhh....I mean I guess we're a gaming group? We used to be BIG into World of Warcraft, then Wildstar, then Rust, but we don't do any of those anymore (except WoW). You could say we're a shitposting group who coincidentally plays video games, but I like to think of us as an extremely fucked up family that lightly dabbles in incest. We don't do one specific thing, but we do a little bit of everything though, and we usually go with the flow. WIDEVERSE is mostly a member driven community, so if someone wants to play something or get into a new jam, we're there for it.

While historically our gaming history has included dozens, if not hundreds, of games, our most recent addictions have been:

The official WIDEVERSE stream runs 24/7, playing old stream VODs and video clips from the past decade of gaming.

Once upon a time, we did a monthly movie night. Will it return? Maybe! But for now its fairly sporadic.

Airing every Tuesday night, WIDETV shows a selection of seasonsal animes the community has expressed interest in. 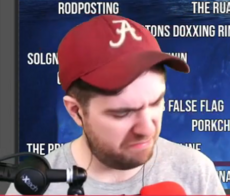 A weekly stream hosted by Taylor and Prude, breaking down news both international and WIDE, as well as special guests from other notable members, as well as city reviews, anime and game reviews, and general banter. After the stream, there's a late night viewer driven AFTER DARK segment where the boys hang out with Biggers and viewers and game and just shoot the shit.

Who runs this crap wagon?

However, different segments of BMW have different leadership, such as BEEFY BOYS and BEEFYBOYS.WIN being led and developed almost solely by Prude

I'm still reading because I'm a masochist and/or autistic, where do I go for more info?

Glad you ask! If you're a real pipe hitting gamer word, then you'll want to delve deeper into the history and information about The WIDEVERSE. Try the following links for some HOT LOADS (of info):

Very cool my dude, if you've made it this far without dying of cringe you're probably a MASSIVE chad whos sexual prowess is renowned and potentially feared. Most your funs going to be had directly in The 'Cord

90% of our communication is done in Discord, because who doesnt these days? You can easily join our Discord here: wideboys.win

If you know what a "Fediverse" is, then you'll love (or hate, if you're a Mastadon loser) our Fedi instance: beefyboys.win