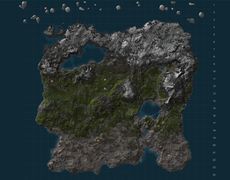 Goon Playground was a Goon hosted Rust server co-owned by Bishyaler and Shadowgate after the latter agreed to fold his own server into the formers. The server served as the stage for the Playground Wars and directly contributed to the creation of BMW.

Shadefyres infamous "Art Gallery" (on the left) near Laketown.

After the formation of BMW, the servers population dropped to near zero, with only Method Man and a few random pubbies and Goons hanging around. The server would languish in this state for months until the Fall 2015 Hiatus.

After BMW went silent for a few months, Bishyaler, at Taylors behest, tried a fresh reboot of the server to inspire interest from the diaspora of Bimmers and hopefully pubbies as well. The effort was mildly successful, with many Bimmers using it as a chance to fight against each other, including Taylors infamous GMFORD DREADFORT solo raid and The Christmas Day Massacre. In January of 2016, BMWs revival led to the server to return to its period of inactivity. However, handfuls of pubbies would later find the server and keep it going throughout early 2016.

On September 29th 2016, after the original Rusticity went down due to the admin no longer wanting to host it, Taylor met with Bishyaler with a proposal to rename his server to Rusticity, essentially stealing the brand. Work was done to replicate the server almost exactly, quickly gaining most of Rusticitys userbase back overnight. However, the former admin, angry for some reason, paid a large amount of money to continually DDoS the server, bringing it offline several times until Bishyaler could set up adequate protection. Playerbase lose was minimal, and the server continued for 2 weeks with few hitches. However, in typical BMW fashion, the true killer was infighting, as BMW had largely split up in an effort to not immediately raid everyone off the server, and the splintered factions began petty arguing, mostly coming from Ashy and his crew. By the end of the wipe, the server was dead, and Bishyaler pulled it down to prevent further security concerns from popping up.

The lasting legacy of Goon Playground is impossible to fully quantify. The modern era of WIDEVERSE came into being purely because of the interactions the server spawned.