The Playground Wars of Goon Playground were a series of battles and skirmishes that took place on the server in the waning months of pre-BMW Rust. The wars are widely considered to have directly caused the downfall and eventual death of Goon Playground. Conversely, the wars also led to the formation of BMW, and the eventual merging of it and COMMUNISM.

One of the earlier big groups was a group that went by the name laketown. Named after their town situated on the lake in the middle of the map, the group was led by some of the more annoying personalities on the server like Ozmiander. Laketown was eventually raided by GM and other members of the server, mostly because of their shittalkking. The remnants of Laketown fled south into the desert, where they reformed under the name Gun Desert Crew. They kept up their old antics and eventually were raided again by GM, forcing most if not all of the members off the server.

In the north, a clan called FORD, led by Cal Worthington and TheCaptain began causing trouble for the other clans on the server and flexing in the Rust thread. GM, as the leading clan on the server and self proclaimed arbiters of justice, quickly began a rivalry with FORD. The two sides traded barbs on the forums and kills in game, with no side really striking the others bases.

The two sides relative non-aggression ended on the night of May 13th 2015, Cal and FORD struck at the heart of GMs base in DETROIT. All of GM was slaughtered in the attack (which occurred at night so no one was actually online), as well as all of GAY in GAYVENGERS TOWER. Cal taunting GM immediatly after in the thread with screenshots of all the sleeping corpses he had killed[1].

Not content with his domination of GM and GAY, Cal went after the next biggest target on the server: WUTANG. Led by Method Man, WUTANG was a much lower key clan but still very powerful, having a very large circular base to the west of DETROIT. The attack was quick and once again done offline. Cal again went to the forums to boast of his exploits. [2] 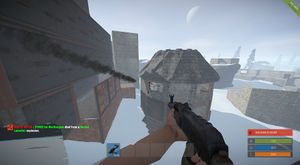 GM had spent much of the next week rebuilding after the fall of DETROIT. They spent days amassing resources to get revenge for the fallen. The counter-attack came on the 17th of May 2015, when Kimsemus, Rejdukien, and other GM members attacked the main FORD base with the newly added rockets. Cal happened to be the sole member of FORD online for the raid, and dutifully attempted to fend off the raiders, but was no match for a rocket to the face.

When it was clear the base had fallen, Cal fell back to what was formerly the WUTANG tower. However, still heavily damaged from his own raid earlier, the base offered little resistance to GM who was still flush with resources. [3]

While the major clans were feuding, the smaller clans were left to their own devices. GAY had become somewhat of a mid-card powerhouse, mostly due to its protection via GM. GAY had amassed a sizable cache of resources and regularly struck out at other minor clans on the server. However, a major roadblock arrived on the server in the form of a bunch of furries from Reddit. Taylor and DroneVandalism scouted their base for a few hours before they were ambushed by a farming party, but Taylor and Prude later came back and destroyed their base, removing the obscene furry art. [4]

In the meantime, a small gang of fringe Goons and pubbies had joined under the clan name of GAY. Led by Prude and Taylor Swift, the clan set up in DETROIT next to the GM satellite base in a building they called GAYVENGERS TOWER. They were also responsible for builing the ZIGGURAT in DETROIT. Far to the south, in former GDC territory, Taylor had established a well defended base called FORT TAYLOR. Most of the clans better loot was stored here, in what was assumed to be a safe location. However, the FORT was broken into by an unknown party. No one ever admitted to it, but its highly speculated it was GM.

GAY would later clash with a group calling themselves GM Mexico, who when encountered were assumed to be allied, but gunned down the GAYS. A minor scandal broke out when GM leadership disavowed the rogue clan. The situation was handled by a fight to the death between Prude and a GM Mexico member in the THUNDERDOME using spears. Prude lagged out and lost, costing GAY many resources. 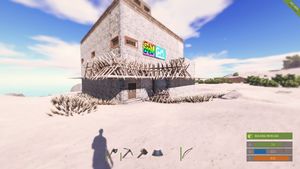 The base built on the ruins of FORDS failure at FIRE ISLAND.

After the first wipe of Playgrounds, a new map was selected that featured a massive island to the southwest. FORD was the first to claim the island, but a small detachment of GAY forces showed up shortly afterwards and contested the island. Prude and Succ, using basic weapons, bested 3 or 4 FORD members, and drove them off the island, allowing GAY to make a foothold. After more GAYS logged on, they struck an official pact with GM, and formed the cooperative GMGAY FIRE ISLAND base.

With the formation of BMW and the lack of new pubbies joining the server (or in rare occasions when they did join and were almost immediately hellowned), Goon Playground steadily tapered off, with most everyone moving to Rusty Bottoms (except for Method Man who spent a month playing solo to destroy the DREADFORT). The server would later be attempted to be revived several times, with varying success, but the server never saw the level of rivalry and bloodshed it had seen during the wars.