The House of Wolves was the name given to a rather humorous but also creepy af bug that occurred on the COMMIE CREW Rust servers first iteration. 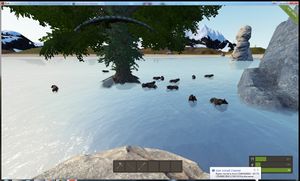 The bug consisted basically of an error in the games spawning code, where instead of spawning trees, animals, air drops, etc at random, it for some reason spawned them all at the 0,0 coordinates on the map. It happened to be a very rare bug but its about right that it would happen to COMMIE CREW. Furthermore, the objects spawned at the center of the map exhibited weird propertys such as trees with no collision, unkillable wolves, and airdrops that would bounce around at random.

The bug was discovered in two ways. Firstly, whenever an airdrop would be summoned, it would never arrive at the location that you set the signal flair down at. Secondly, as trees were chopped down, they would never respawn in the area. Instead all of it would be respawing at the center of the map in the lake. The same went for animals, but only seemed to be affecting wolves for some reason.

When the COMMIES realized the bug, and then realized that the only way to fix it would be to wipe the map, they decided to play with it. First off, Shelarahn built a platform out to the spot so that they wouldn't have to swim. After that, they began building a "sarcophagus" to house the eldritch horrors that were emanating from the spot.

As the bug got worse and more and more entities began "breaching containment" the sarcophagus continued to grow until it was a multistory building.

Realizing it was one of the funnier bits in a while, Shelarahn began putting together a Blair Witch style video using old FRAPS captures and some cellphone captures from Pigeon.