The Lightninghoof Invasion was the first major operation by the newly reformed COMMUNISM in 2013, after the failure of the Friend Zone Project. Its regarded as one of the great Golden Ages of COMMUNISM and marked the groups return and established many of the groups main characters.

After the failure of The Friend Zone Project and The Banishment of Shelarahn, COMMUNISM was in a complete state of disarray. The complete roster was less than 10 people, no clear leadership, and no future. By early July of 2013, the group was no more than Shelarahn and the odd member in voice once a week or the odd DM.

On July 18th 2013, Prude returned from his long sabbatical dedicated to the idea of reforming the old group. Together, he and Shelarahn set out getting people more interested, mainly the few loyalists still around from Friend Zone. Additionally, Prude reached out to his long time high school acquaintance, Pigeon, who bonded with the group immediately over talk of breakups and ex-girlfriends.

Two of the Friend Zone loyalists, Dlight and Shilav, suggested that the newly reformed COMMUNISM look to the WoW server of Lightninghoof as a launch point for the new WoW venture. The server was ideal: Few large guilds, no huge raid scene, very casual.

COMMUNISMS arrival was relatively lowkey, with the usual Trade Chat and guild invite spam. Shelarahn had the brilliant idea to create an ISIS style propaganda video addressing the forums of Lightninghoof that was received with much confusion, but got the name out. A few recruits trickled in over the first few weeks, giving the guild some life.

One of COMMUNISM first victims was a Shaman by the name Xjxjxjxjxj, who claimed he was a Dutch cancer patient. Pigeon posed as an e-girl in an attempt to catfish him. In retrospect it was very strange. This however led the COMMUNISTS to a larger target: DISTRACTION. A "hardcore" PvP guild led by a literal ditch digger in LA County. They were ripe for trolling, so IRON CURTAIN began gathering intel and infiltrating the guild in an attempt to undermine them. The operations were largely successful, but the mission changed when one day mid-battleground, the guild leader told the voice chat that he had shit himself. Immediate victory was declared because its never going to get funnier than a dude straight up dropping a log in his tighty whities while playing World of Warcraft.

Afterwards, other operations were planned against other guilds but never came to fruition in light of COMMUNISM attempts at breaching into the raiding scene.

By mid-October, COMMUNISM was at a point where it was large enough and had enough geared and active members to start fielding its own small raid teams. The first scheduled raid was a 10-man Mogushan Vaults that was mostly a success. The guild did a few sorted Terrace of Endless Spring and Heart of Fear runs, as well as organizing some Tol Barad Prison runs, but never got into any real progression.

Another hallmark of the guild was its involvement in World PvP in the form of Timeless Isles, specifically bullying the Orc Hunter INSERT THAT GUYS NAME HERE WHEN I FIND IT. 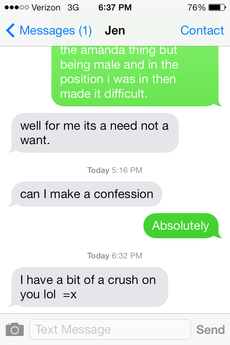 Jens confession to Prude. Not pictured is the soul crushing cringe and awkwardness.

One of the more vocal and upfront recruits from Lightninghoof was a trailer trash woman named Jen. Jen would frequently come into Mumble with her mic on voice activity so you could hear her other trailer trash friends in the background cooking meth or listening to ICP or voting for The Green Party. As with most forlorn women who joined COMMUNISM, Jen especially grew close with Prude, to the point where they were texting. In mid-December, Jen used this opportunity to confess a crush on Devin, who was probably 10 years her junior and 300lbs her inferior in mass. Prude, appropriately, was freaked out and told Pigeon and Shelarahn. The common advice was to hard ghost her and ban her from everything. She responded by kicking everyone from the guild and writing a passive aggressive Message of the Day targeted at the COMMUNISTS, after which she joined the rival clan of <DISTRACTION>, owned by the aforementioned pants shitter. This was largely shrugged off as the COMMUNISTS had long stopped playing WoW. She disappeared afterwards, driving her hoveround into the Michigan sunset.