The Skirmish Of Wonka Plains was a battle in Discord between DerVerrater and Kimsemus on the Wonka server. Originally entering as part of a Royal Peace Delegation from the WTT seeking to broker a fruitful non-aggression pact with The Wonka's of the Wonka ghettos. These negotiations suffered major set backs due to actions on the part of the Wonka Ghettos actions leading to Der making a heroic stand.

Taylor Swift formally leading the Royal Delegation would disavow the actions of DerVerrater whom accepts sole responsibility for his actions on the grounds of truth and principles.

Though ending in a Skirmish the initial contact between Royal Delegation and The Wonkas was an outreach operation designed to foster and strengthen the Wonka community with the wisdom and humility of those whoms't talk trucks. 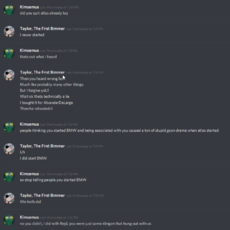 Though initially the Royal Delegation was met with a neutral response and allowed to remain for the duration of the outreach/negotiations accusing Taylor Swift of having played known bad game ATLAS without probably cause before launching into another false assertion that it is believed Taylor started BMW (A lie which Tay confirmed but was later talked sense into) and then stating the even more blatantly false and homosexual line that it was 'He' and Rejd that started the group.

The Confirmed Creator of BMW whilst acting in a seneschal capacity as part of this Royal Delegation would not allow suck lies to stand and refusing to allow such libellous information to spread separated him self from the delegation to combat it. 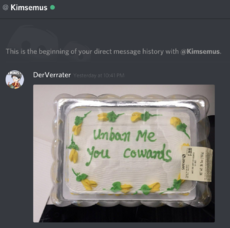 Der Quickly took a stand openly in the chat, Pausing only for a brief moment to request a meal that Taylor had offered openly. Though on the field the commanders of the Wonka Forces had sequestered themselves inside a voice room narcissistically named after the commander of their forces.

Der launched a classical lance charge upon the server reaching in the tail end of conspiring between the assembled forces. He quickly launched a flurry of pointed statements in greatest accent known to man. This unexpected and masterful strike left the assembled forces in stunned silence before the lone hero before they using the home field advantage in grounds and entrenchment returned fire deploying the nuclear option unable to respond to the accusations laid before them.

The incompetence of his foes shun before him however as unable to properly remove him from the field on their initial attack they simply pushed him back temporarily an attack he would rapidly recover from and return to field unaffected by the strike.

As his foes immediately went to the heaviest artillery known to them the mythical BANHAMMER believing such an option would be enough to defeat the shrewd commander they simultaneously launched a covert ops attack against his personage far from the battlefield on the ATLAS Goon discord an area unrelated to the battle at hand and possessing only civilian targets.

Whilst intel on the aftermath on the field of conflict is scarce it is certain that a sense of smug self satisfaction was felt by the Wonka Forces at this time.

Undeterred by the heavy artillery used by Kimsemus Der used the space afforded to him when the Soi Bois forced him back. Though the use of scorched earth tactics made his main approach no longer tenable he instead took to the flank approaching in from the far-east using deniable and temporary assets he launched an attack citing the underhanded actions of one of Kimsemus lieutenants Rejd striking at Der's ASSets in an unexpected locale the ATLAS discord.

Returning to the field in full after the flanking Der launched a full and open assault on both the maturity and power hungry nature of the Soy filled discord Admins, facing down 3 of them in a field which they control without fear. Kimsemus once again only able to wield power over those and incapable of responding to any reason requested that Germany do the hard work for him and had him strike the Irish Rebel from the server.

Though possessing avenues for an easy return Der decided the battle had served its purpose and chose to withdraw from the field rather than risk any negative consequences for the Royal Delegation.

Though not a victorious outcome for Der the victory for the opposing forces was Pyrric in nature as it highlights the delusions and structural failings of their orginisation and fragile egos.

Images Of The Battle