The The Wonka Rebellion (Also known as the 3rd COMMUNISM CIVIL WAR) was a split in WTT that formed from a group of disgruntled admins (see: crybabies) that resulted in a spin off discord that died within a few moths.

In the first few months of BMW, there was no real admin structure or leadership, instead those that were most active and trying to call shots were given higher positions to help coordinate the Rust group. These rolls would frequently shuffle and many people came and went from "leadership". However, towards the end of the Rust era and going into the later months of 2016, the musical chairs act that was leadership settled on a few people: Taylor Swift, Rejdukien, Hazlen, Gmach, Ashy, Lancek, and Kimsemus, as they all had been the most active towards driving the group. The problems however began with the stagnation of the group and the downfall of the Rusticity server. Ashy and Gmach would soon begin sparring daily with noted trapologist, Prude, and former anime lord, Succ.

The real problems began after the Discord update that added the ability to react to messages, a group of admins became irate when Taylor told them to tone down the overuse. This resulted in said group taking their ball temporarily and making a new Discord to cry about Taylor called Westworld. Hostilities between these admins and Taylor would only continue to grow for the next year and a half, as eventually Gmach and Ashy would ragequit over their inability to harass and ban people from BMW as they pleased.

The tensions were made much worse by the fact that whenever Taylor would try and discuss any of the issues, he was just met with snark and condescension.

After years of distrust and a rising suspicion that The Wonkas were up to something, Taylor restructured the Discord to prevent a possible scorched earth betrayal, even having a member of WTT place a "fail safe" in Yinbot that would kick anyone trying to ban or delete too many channels at once. As part of the restructure, the bot channel was not properly given rights to Trapbot, resulting in its inability to queue songs. Rej had a massive melty in general chat, which provoked the 3 admins leaving. They immediately began trying to slander Taylor as a power hungry rape ape, saying he had banned them in an attempt to grab power or something equally stupid. A few morons fell for it and left WTT for the newly formed Discord, Wonka. However, after the first week or so, momentum for the group halted and their attempts at libel fell on deaf uncaring ears. 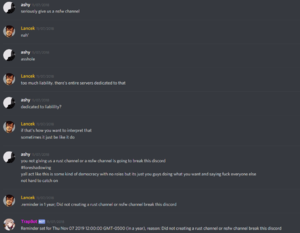 "All Sad Words Of Tongue And Pen, Taylor Swift Was Right Again"

Due to their running ArmA III and Starbound servers, Wonka found some initial success in "poaching" members from BMW. However, after the honeymoon period ended, most these members save a few diehard believers drifted back to WTT (Some say they were never poached to begin with and just didnt care about gay admin drama and just wanted to play games). As such, within a month or two, the Discord was a ghost town. The Wonkas sought to revive their failing efforts and to this end, recruited former admin, Ashy (Just as Tay had predicted they would). Ashy immediately brought in a few old Bimmers from old times and breathed new life into the group, specifically restarting the Rust venture. However, Ashys mercurial nature and propensity to fly off the handle soon brought him to blows with The Wonkas. After repeatedly refusing to give the Rust clan its own channel and role, as well as failing to do literally anything else people asked of them, Ashy broke his small group off, once again turning Wonka into a ghost town. 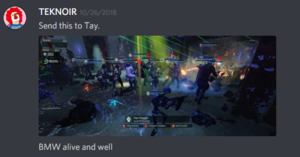