Battle of the Bulging Nose

The Battle of the Bulging Nose was a shitposting conflict between the rowdy and untamable BEEFY BOYS and the Neo-Nazi LARPers of Poa.st. The battle was a result of months of tense relations both between The Boys trolling the Nuremspergs for their shit political takes, as well was Graf's increasing jealousy at how handsome and MEATY the BEEFY BOYS were compared to his emaciated alcoholic Canadian frame.

On May 1st 2021, Prude quietly launched BEEFYBOYS.CLUB in his ongoing efforts to decentralize much of The WIDEVERSE, in hopes to avoid The Final Bop. Much of his experience and reference for setting up the instance came from Alex Gleason, developer of the software the site uses, and Graf, a fellow admin of one of the larger right-leaning instances, Poast. Poast had not long been on Fedi, only launched in January of the same year, but had quickly become the landing spot for many right-leaning personalities fleeing Gab and Twitter. This included Prude in his initial exploration of the platform before starting his own instance. As such, there was a natural friendship between the users of BB.C and Poast in those early days, with Graf occasionally lending assistance with Prude's early troubleshooting. Additional members of Beefy Boys trickled in thereafter.

The summation of almost every hellthread between Poast and BB.C

This period of peace was short lived, as around November of 2021 Poast experienced an increase of refugees from Gab due to disagreements mostly stemming from Groypers and their associated Podcast heroes. As such, the personalities on Poast began to take a turn for the worse as LARPers displaced the previous mostly Anime Right userbase. Whereas before most posts were lighthearted and fun, they now were mostly shitty takes on current politics ranging from hating Donald Trump (also known as Trump Derangement Syndrome) to simping for dead Iranian generals or rationalizing being on welfare. Tyler saw a prime opportunity to poke fun at these retarded takes and found them to be easy to provoke into a hellthread where they would ree for 12+ hours.

He became so infamous prior to the shift from BEEFYBOYS.CLUB to BEEFYBOYS.WIN, that most of the more prominent wignats had him blocked and muted, to avoid getting dookie chuted[1]. This of course changed with the domain move, as with a new account he was no longer blocked, and able to once again troll with little hinderance. This proved fatal for Poast, as when Tyler made fun of a Nuremsperg for condoning looting (an act they had just a year prior condemned as being something only people they saw as subhuman did), Borzoi (one of the podcast hosts/"intellectuals" that Poasters simped for) attempted to dunk on him, not expecting the Slavic chad to pull out his ace.

Posting of the Nose

That ace proved to be a picture of Borzoi's Jewish wife, an ironic relationship given his much proclaimed hatred of Jews. Immediately he flew into a rage, sources saying he sent 100s of angry DMs to Graf, demanding he defederated Tyler lest the podcasters pull their sizeable financial contributions from the site. All while simultaneously trying to claim in the open that the images weren't even related to him--statements in clear contradiction to the reactions of the Poa.st admins and Borzoi himself. Graf, being completely beholden to the Podcast Race, willingly obliged in defederating Tyler, powerless to disobey. Poast was in utter shambles at the sight of a single JPG. Succ, hearing of the butthurt, promptly joined the posting of the nose, as did many others from various instances. This resulted in all of BB.W getting defederated, as well as other instances and users.

Prude and Jack, attempting to play Good Cops, calmly reasoned with Graf and succeeded in getting BB.W refederated, albeit with Tyler and Succ remaining individually defederated. Despite this, Poasters--still in a rage at their idol being attacked--spared no mercy in their assault on the two for daring to stand up for their friends. This gradually cooled into an armistice which lasted for a few days, before Prude, in a hellthread with Eris, answered his demands for anti-Poast action by offering whimsically to join any large instances that defederated Poast in solidarity. This was intended to put the onus of action for unrealistic schemes back on Eris.

In an unrelated later thread, Graf then posted an out of context screenshot of Prude's "blockade" post and began referring to Prude as "the biggest snake on the fediverse," obviously having taken the theoretical scenario personally. As Graf became increasingly hysterical and began threatening additional sanctions that would amount to de facto instance defederation anyhow, Prude and Jack both likewise had enough and joined with their fallen comrades in sending a final message and posting NOSE.JPG, getting BB.W defederated once and for all on its own terms. 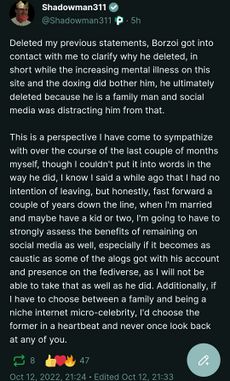 The Posting of the Nose sent shockwaves throughout all of Fediverse. Posting.lolicon.rocks then Kiwifarms.cc most notably joined in by creating an emoji of the image, the latter of which was an action by a rogue intern that proved to be unfixable by KFCC staff. Further rogue KFCC elements began spamming Poast with pictures of the nose, forcing Graf to once again bow to Podcast Race pressure and double down on his new users filter for pointing at "problem instances," which in turn accidentally almost defederated Poast from KF.CC. Graf's mental health has continued to be a subject of discussion.

Podcast simps remain mad as fuck that anyone would are disagree with their unassailable ethos, lamenting the horrors of doxxing (despite continuing to do it to targets they deem worthy). To this day, they routinely arrive in hellthreads to strawman The Boys and mald, even knowing real interaction is no longer possible between the instances.

On October 12th 2022, Borzoi deleted his Poa.st account due to continued trolling via NOSE.JPG. His ball riders and sycophants would try and paint it as "Borzoi wanting to be more of a family guy" while also pretending like they will ever touch a woman themselves.