The Troon Uprisings (Referred to as Operation Goonraker originally by MOTHER agents) were a series of bitchfits the Troons of SomethingAwful threw on the QCS subforum regarding the FYAD subforum that resulted in the latters closure then deletion. The incident later evolved into CSPAMs open revolt against the SA mod team, resulting in PartyPlaneJones being outed as a "Nazi hunting spy" and his self requested permaban.

While most the event surrounding the particular event are isolated to the event itself, the roots of the matter stretch back many years, predominately due to the rapidly changing demographics of SomethingAwful and its shift from a comedy website to a trainwreck circlejerk.

During the early teens, SA began shifting away from its Internet 1.0 reputation as an edgy frontier of shitposting and goon rushes into a more socially conscious website focused on political matters, social and otherwise. As a result, the sites Overton Window shifted hard left and by the middle of the decade, the site was over run with troons (trans goons) mostly due to the pre-existing autism rampant on SA.

On December 9th, QCS (SA forums meta forum for bitching) blew up because FYAD, being FYAD, had bullied a queer or something. To be quite honest I have no idea what happened and dont care because as cringy as troons are, FYAD isnt much better. Regardless, FYAD got closed, as did QCS, and the whole mess blew up even further. Wild accusations were being thrown around about Lowtax protecting FYAD because hes a racist Nazi etc etc. Lowtaxes sporadic YouTube streams were constantly inundated with complaints and bitching about his admining of the forums.

On New Years Eve, Lowtax had another of his streams, and again was being bombed by both CSPAM nerds and FYAD fags. In response, he probed a bunch of CSPAM people (as it would later be rumoured, at the suggestion of "Nazis"). Troons went into full revolt and founded The Succ Zone, a spinoff of the CSPAM forum comprised of its most active users. Immediately, the mods and admins began planning a new offsite, named Bread and Roses, that would be safe from Nazis and FYAD. Meanwhile, in the Discord channel for discussing SA drama, anger began being focused primarily at the Debate & Discussion subforum mod, PartyPlaneJones.

Over the next week, users discussed their demands from the mods and admins and continued protesting the banning of their leader, BENGHAZI 2.

On the afternoon of January 6th, Succ Zone user Pound_Coin (also the leader of UKPol Discord) reported that he had discovered that PartyPlaneJones was a regular contributer to the WTT Discord. Throughout the next 24 hours, Troons valiantly searched through Discord logs, KiwiFarm posts, and other sources to prove definitively that PPJ was a member of BMW. 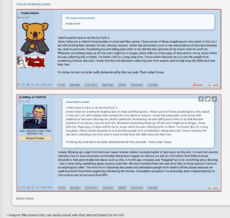 With their results in hand, they stormed the forums, forcing a response from the mods and PPJ himself[1] that was frankly confusing. PPJs cover story was that he had been ordered by other mods and admins, specifically Jeffery of YOSPOS and Koalas March, to infiltrate and keep tabs on the Bimmers, specifically in the wake of Operation Overlard. He explained that he used a link from Lowtaxs Gaming Garbage Discord that he got during The Siege of Lowtaxia and joined and gained "The Discord Nazis'" trust and fed info back to the mods.

The story was immediately mocked and subsequently memed by FYAD, CSPAM, and pretty much everyone else. His story was full of holes, including but not limited to the timeline in which he said he had joined BMW and the admins inconsistent story on Jones specific orders, or if there were even orders to begin with. Further doubt was cast when Capri Sun Tzu suicide bombed into the thread explaining, with posts, that Jones was way more active on WTT than any other Discord, and that he had in fact been a member for almost 3 years. CST was of course permabanned for the post, but it fanned the flames even hotter.

PPJ ended falling on his metaphorical sword, left BMW, and self-permad, disappearing into the night. Some say he's still hunting Nazis to this day...

Just after Jones quit, a handful of Troons "invaded" WTT Discord, including CascadeBeta himself. The whole affair was pretty sad and lasted about an hour until Prude got bored and banned them for being really cringe.

Emboldened by their outing of Jones and Capris perma, troons then set their sights on the rest of BMW, namely those who were still active on SA and associated Discords. A pastebin of Bimmer usernames and Discord ids was passed around Leftist sympathetic Discords and all members, active or not, were kicked.

Ironically enough, also targeted was Tempus Thales and his GDN bot. Tempus, now apparently also a Nazi, was bombarded in his Unofficial SA Discord with CSPAMers demanding answers all while dozens of Discords removed the bot from their server. In a shocking betrayal, Kimsemus ratted on Tempus, revealing that GDN in fact had an exploitable weakness via its API. Kim was subsequently banned from The Unofficial SA Discord, but the rumor had gotten out regardless.

Attempting to quell the wildfire, Tempus posted a thread in the Private Games Servers subforum but was immediately swamped by peopled demanding the source code of the bot to be release, which after an hour or so, IAmKale eventually caved to [2]. This did nothing to satisfy the Goons, who went on further to demand that all Bimmers be banned, despite most already being banned over a year earlier. Regardless, on the 9th and 10th, TT banned the non-offending Bimmers from his family of Discords.

In the end though, GDN had lost dozens of servers and almost 50% of users were lost from the network.

Throughout the uprisings, the CSPAM troons had been jockeying for modship under the guise of making the site better. Meanwhile, in their Discord they spoke to each other of how'd they'd use this power to lord over people they deemed Nazis and how they would leak mod chat. This was revealed to the general public on January 9th, when Taylor leaked the Discord logs[3] of Succ Zone gathered via a MOTHER operative. The mods and admins of SA ended up reading the logs and the excerpts posted on KiwiFarms, and used it as evidence that no one from Succ Zone should be promoted or allowed to become mod.

As of January 18th, the uprisings had mostly died down to a dull roar of probations and crying in QCS.

On January 23rd, Bread and Roses website was officially launched and almost immediately locked down except to well vetted members.

2 week later, Koalas March announced she was taking a break from modding the now dead subforum.

As a result of the Uprisings, KiwiFarms and BMW developed a brief close relationship.

The Troon Uprisings end also signaled the end of the long waged Clown World War I.