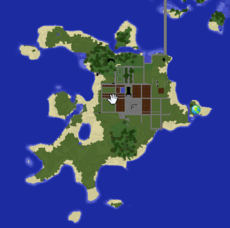 The spawn island and Jacks Plantation seen in Dynmap.

On May 25th, 2017, after a period of reminiscing on old times in Minecraft and Jack playing solo, Taylor booted up a Vanilla + FTB Pack server with a 5 player limit for the Bimmers to fuck around on. The map used was the map Jack had been working on in his own time solo. The server was immediately successful, forcing a change in the player cap up to 10 people, stressing the BMW VPS. Most effort was concentrated around Jacks Plantation, but Taylor in typical fashion fucked off far to the west to build a giant nerd cube.

After a few months however, interest waned in Vanilla Minecraft, and the server was archived in favor of a modpack.

The second server was a shortlived heavier modpack, Ozone 3, suggested by Hori. However, the server frequently crashed as the hardware was unable to handle it. The most notable event of the brief event was Taylor accidentally shoahing an entire village.

The 3rd incarnation of Bimmercraft came over 2 years later, on September 22nd, 2018, during the BMW 3.0 Period. The server was strictly vanilla, running the 1.13 version of Minecraft. The server was initially started as just a small project for Taylor and Peaches to mess around with, but the server soon attracted many other Bimmers, including Jack and Cynthia, as well as others. After a week with an increased playercount however, the VPS, due to a CPU and memory leak in the newest version of Minecraft, had to be moved to a different host.

The server ran for about 3-4 months before interest waned, and the server went into haitus

In October 2021, Bimmercraft 3s map was chosen to be preserved as part of the new WIDECRAFT server project.

The spawn city was built right over the original spawn point of the map, right on the shores of a comfy little lake bordered by mountains on one side, and a long plain on the other. The first base built was a cobblestone nerd shack by Jack into the side of one of the hills. Later on, foundations were set down for a large manor by Taylor and Jack, that would later become Taylors Mansion. Peaches would branch out to the north and built a small hut and nerd tower. A large farm complex was built by Taylor later on as an addition to his manor. A crypt was also built to memorialize Bimmers of Olde.

Jacks shitcave was later bulldozed and turned into a tunnel that connected the other side of the lake and mountains with Bimmer City. Under the old cave however, Scuba Steve used all his autism constructing a mob spawner.

Cynthia Dutch, in usual fashion, ventured far out from the pack and found a isolated swampy atoll in the middle of the ocean, and set up shop there. She built a very nice modern style home on a smaller island off of the atoll.

Bimmercraft 4 was formally known as The TayPack, a shortlived attempt at a server in early 2019. The server featured the return of longtime mainstay map, Southland. The server never found much success and was shuttered in Summer of 2019 in favor of GorzhakCraft.