7 Days to Die is an early access survival horror video game set in an open world developed by The Fun Pimps with an expected completion date of May 2014. It was released through Early Access on Steam for Microsoft Windows and Mac OS X on December 13, 2013, and for Linux on November 22, 2014. Versions for the PlayStation 4 and Xbox One were released in 2016 through Telltale Publishing.

The game's events happen during aftermath of a nuclear Third World War that destroyed an extremely large part of the world, except for some areas such as the fictional county of Navezgane, Arizona. The player is a survivor of the war who must survive by finding shelter, food and water, as well as scavenging supplies to fend off the numerous zombies (hinted to be the consequence of nuclear fallout) that populate Navezgane. Though there is no real objective except surviving at this moment, the developers promised a dynamic story line in the Kickstarter and stretch goals, the video with more explanation has since been removed by the developer.

In “7 Days to Die”, the player spawns into a randomly-generated world or the preset world of Navezgane, Arizona, with the objective of surviving for as long as possible against the elements and the zombie hordes. As a survival game, the player character is in constant need of water and food for sustenance, as well as being vulnerable to injury and illness. The game is voxel-based (similar in some aspects to Minecraft), allowing for simple building, and destruction of objects in a physics-simulated environment (for example, building a structure with no support such as pillars and walls can lead to its collapse). Objects in the world degrade through use, so the player has to search for or make new tools as the game progresses. The player can also gather and create materials—from nature and the remnants of human civilization—to construct these necessary items.

While the game includes wildlife that can be hunted for food or will hunt the player, the main hazard is zombies, which are affected by the game's day/night cycle—during the day they are relatively slow-moving and easy targets that can only detect the player at relatively close ranges, but at night they become feral, which makes them move much faster and thus greatly increases their threat. As the in-game days progress, tougher and more aggressive variants begin to appear. Stealth and distraction can be used to avoid unnecessary conflict, while carrying foods that have a smell (such as raw meat) will attract zombies. They are also drawn to areas of human (i.e. player) activity, and will relentlessly attack anything that impedes their movement until they are killed or the obstacle is destroyed—this includes player fortifications. Should they detect the player, zombies will apply the same single-minded pursuit until the player is either dead, or leaves the immediate area.

The game's title is a reference to an important Blood Moon event that occurs every seventh day of in-game time, whereby hordes of zombies and wild infected animals attack the player's current location en masse—unless sufficient preparation has been made and defenses constructed, the player will quickly be overwhelmed.

Multiplayer is available through player-hosted servers and enables multiple players to interact and communicate with each other on a single world. Interactions can be cooperative or hostile depending on the used server options. Players can run their own servers or use a hosting provider. Single player worlds have local area network support, allowing players to join worlds on locally interconnected computers without a server setup. Players are also able to provide Wide Area Network support via single player worlds. 7 Days to Die servers can run on consoles, Windows and Linux. There are two supported game modes for multiplayer: Survival (both randomly generated and standard) and Creative.

Briefly in 2015, COMMUNISM briefly tried 7DTD but it wasnt very fun and didnt last more than a night. 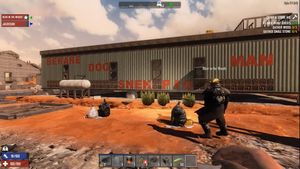 The boys in 7DtD painting a house.

Coathanger set up a 7DtD server in late August of 2019, meeting with moderate success. Jack, Bearinthewoods, and Taylor were all involved, with participation from ADL and Alt as well. The server lasted a few weeks but was taken down due to the pricey hosting cost.

In June of 2020, Coathanger again started hosting a server, this time self hosted to control costs. The server was again very popular, even leading to a second server being hosted by Alt that was brought online when Coat was unable.

Pringles led a briefly successful server until internet issues as well as technical issues led to the server falling apart.