WIDEBOYS is the central group on which the wiki is based. The first branding that departs from the 3 letter acronym naming scheme started with BMW in 2015, WIDEBOYS represents the groups shift even further back towards the original roots of COMMUNISM. Many within BMW leadership have agreed that the Wideboys branding will be the permanent branding henceforth, ending 4 years of shifting and changing brands and group names.

Transition (no pun intended) to the branding of Wideboys began in the wake of The Troon Uprisings, after TT once again tried to curry favor with the woke mobs by banning the very few Bimmers left within the GDN network (99% lurkers ofc). In his new proclamation he for some reason referred to BMW and its associated groups as the "Wideboys". This was accidentally a genius naming scheme and was immediately adopted into favor of the aging WTT name, which no longer made much sense and was dumb.

In an ironic but typical twist, the purging of Bimmers from GDN led to a very small exodus of certain lurkers, but in the months afterwards sparked a massive influx of new members into the group. Even further ironically, this series of events led to a brand new Golden Age of activity, partially thanks however to the COVID lockdowns forcing everyone to be at home all day with nothing else to do.

After the abrupt banning of BEEFY BOYS in The Night of Long Steak Knives, Season 2 of Waifu Wars came to an abrupt end and all progress and harems were lost. The decision was made to finally move the wars to Wideboys where hopefully it would never get banned, and on July 1st the 3rd season began.

ADL, who over the previous 6 months had become increasingly at odds with many members of the group due to his increasingly insane and hostile takes, including but not limited to: hating cops, burying bitcoins in the desert, buying property in slums of Detroit, encouraging his future children into sex work, and other clown world stances, was seemingly at the end of his rope and lashed out frequently. On a particularly salty morning, CST and him had an argument that probably went too far, sparking an absolute melty from Alex that resulted in him deleting all his messages and changing his named to "Deleted User" before claiming the Discord was dead and rage quitting. This was of course the second leader hand picked by Taylor in March of 2019 to succeed him. With none left, Taylor was forced to once again take the mantle of The WideKing.

One of the first happenings of 2021 was CST launching the new World of Warcraft raid team, marking the first such crew in The WIDEVERSE since 2013. On January 2nd the team soft launched with a Saturday afternoon raid of the Ulduar timewalking raid, and the next had its official start on January 9th in Castle Nathria. The team enjoyed relative success, even coming within striking distance of competing with the main ATB raid team. However, with the second patch of Shadowlands, it was becoming all too clear that Blizzard was fumbling the bag with the expansion, and interest in the game as a whole began waning. Coupled with Blizzards legal and PR woes, WIDEFORCE was forced into a short hiatus before being disbanded in its entirety for the foreseeable future.

Taylor in Kingborg, the longhouse of the WIDEBOYS.
See also: Valheim Reaving

With WIDEFORCE in the shitter and New World gearing up to be a complete and total flop (Spoiler alert: It was), The WIDEBOYS found themselves in a pickle. All the great plans of 2021 had found themselves outright cancelled before even the middle of the year, with nothing on the horizon. In conjunction with BEEFYTV being shut down, gang activity hit an all time low. 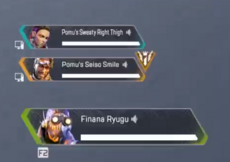 The slump was mostly abated by late May, when in one of the great twists of WIDEVERSE history, Taylor convinced the Biggers to download and play Apex Legends after being brainwashed by Vtubers into enjoying it. Many Biggers joined in and found that the game was not the piece of shit they remembered from launch in 2019, and after a few weeks, was being played almost all day by many members of the community. The game even served as a way to integrate rookies into the group, ala KDB. Interest began waning after the launch of the new season and the release of a new overpowered Legend, as well as FFXIV heating up in popularity.

In early August, Prude began getting the WIDEBOYS back into Guild Wars 2, in anticipation of the new expansion in February of 2022. He began attempts to take the original guild, SAURKRAUT, back from Future, but to no avail. The executive decision was made to tell Future to go fuck himself, and after DrCoathanger graciously donated his own guild that was at the same level of progress, Taylor kicked everyone from the old guild and the newly acquired guild was renamed to WIDEBOYS.

Eventually, Prude began hosting weekly World vs World, a PvP/PvE mode in the game, sessions, bringing in many new faces to WIDEBOYS.

The WIDECRAFT lobby, showing portals to many of the attached worlds.
See also: WIDECRAFT

October saw the return of a Minecraft server to The WIDEVERSE. Originally intended just as a rehost of the earlier Gorzhakcraft, Taylor began engineering the server into one that would never require a wipe, essentially creating a persistent universe.