Runescape is a browser based MMO starting in 2001 that served as the platform for many of the groups pre-COMMUNISM exploits.

An early WIDEVERSE PvP squad. Taylor in the black armour.

Runescape served as the birthplace for what would later be known as THE WIDEVERSE. As a young teen, Taylor played Runescape almost exclusively starting in 2003. There he joined and founded several clans, all doomed to fail seeing as they were run by a 13 year old.

Warriors Gate and Severed Veins are the two most notable clans from this era.

Runescape would fall out of the WIDEVERSE in 2005 as most the group moved to World of Warcraft. 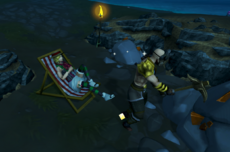 Taylor watching Mez do all the work.

Runescape very briefly made a comeback in 2016, when Taylor convinced multiple Bimmers to sign up and play, albeit for a short time.

Runescape would pop up a few times over the years in the form of Mez playing very casually, Taylors Runescape series on YouTube, and Solgnir becoming briefly addicted.