DizzyEevee (previously known as Kurushimi during The 2nd COMMUNISM Era) is a long time member of the WIDEVERSE. He also serves as a leader for WIDEFORCE.

Dizzy made a priest on Gorgonnash the night WoW launched, because that's where his classmate (later convicted of statutory rape) wanted to play. This was ultimately remembered as a poor choice. Didn't do anything of note during Vanilla, but moving into TBC, being a retarded child growing up with 4chan humor being peak comedy, he quickly fell in line behind Spaceballs and his /2 antics, introducing him to the COMMUNISM crew. 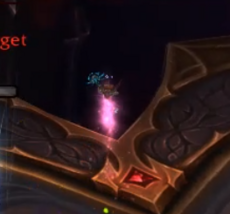 Dizzy plummeting to his death versus Sire Denathrius.

In Shadowlands, he tried his hardest to help lead WIDEFORCE's raids into Castle Nathria.